No Ice After Acute Injury? No - Compress Instead.

When my children bumped their head I used to reflexively put ice on their bumps for 2-3 minutes just to numb the pain a little and to make myself feel like I was being a useful and caring parent. For many years when I encountered an acute ankle sprain on the field, I would again instinctively and immediately place an ice pack on the sprained ankle for 20 minutes to numb the pain and improve recovery by minimizing inflammation …at least that’s what I was taught and assumed to be correct. 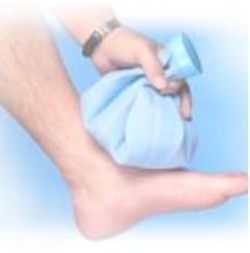 There is certainly anecdotal and clinical evidence that ice has a temporary pain reducing and localized numbing effect (Hubbard et al 2004); therefore if ice is applied to simply numb an area post injury, then I guess it’s alright. However what about the claims that ice helps reduce inflammation? What about the claim that ice helps the healing process post acute injury?

Even though there are some animal studies supporting the hypothesis that icing may have an effect on various inflammatory events at a cellular level (Bleakley et al 2010), that still does not support the belief that many have that icing is actually beneficial in humans in real clinical settings. In fact clinical trials on the efficacy of RICE (Rest, Ice, Compression, Elevation) have supported the use of compression but have found no value in icing (other than the temporary numbing effect already mentioned) (Hubbard et al 2004).

In this short but likely controversial article I will be sharing with you the crazy idea that ice is not only ineffective, but may even be counterproductive to proper natural healing following acute soft tissue injuries.

I have always been puzzled by the proposal that when an injury occurs, we must immediately act to reduce and eliminate inflammation. I just have one question to ask: why? Can anyone answer why the normal inflammatory response post acute trauma is not good for healing? For me it is similar to proposing that the blood coagulation mechanism that occurs after an acute cut is pathological and must be reduced. Why? 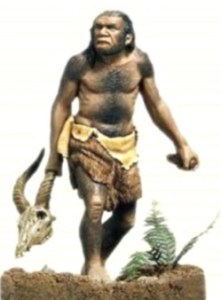 Our mammalian ancestors spent hundreds of millions years evolving and specifically humans have spent about 7 million years in the making. Survival of a species relies on effective physiological repairing of an injury when it inevitably occurs. Do we truly believe that the body’s natural inflammatory response that has evolved over millions of years is somehow wrong? If it is not wrong, then why do we try so hard to prevent, minimize and reduce inflammation? When did inflammation after an acute injury become a harmful toxic agent that must be eliminated at all costs?

Our ancestors did not have access to and did not dream about putting ice on an injured tissue. In fact, the majority of the population on earth still does not accept icing in managing injuries. In Chinese and Ayurvedic Indian medicine, icing is believed to be counterproductive; perhaps they have it right and western medicine has it wrong.

Going back to basic physiology, we are all aware of the three phases of healing followingan acute injury- inflammatory, proliferation and remodeling. Describing the detailed physiology behind each phase is way beyond the scope of my knowledge and this article.

Inflammation is an inevitable and an essential biological response following acute soft tissue injuries. It is a protective attempt by the body to remove the damaging stimuli and to begin the healing process.

Acute inflammation results in vasodilation and increased permeability at the arteriole and capillary levels which are brought on by the actions of various inflammatory mediators. This allows more blood to arrive, and with it leukocytes and macrophages (white blood cells) to “clean up” the injured site. 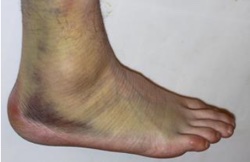 My only concern is that if we artificially “fiddle around” with the initial inflammatory phase of healing, are we not potentially influencing the final remodeling phase? It turns out that we may be negatively effecting tissue remodeling through our obsession to get rid of inflammation with icing and the use of non-steroidal anti-inflammatory drugs (NSAIDs).

Does the body really need help in reducing inflammation? The lymphatic system naturally and slowly removes all the waste products and excess fluid buildup caused by the inflammatory process. While the circulatory system relies on the heart for continuous transport of blood through its vessels, the lymphatic system does not have a “heart” and therefore primarily relies on movement, skeletal muscular contraction and breathing for lymphatic drainage; this may be assisted by elevation and compression. Icing has been shown to reduce skeletal muscle contraction (Bleakely et al 2012) which may temporarily reduce optimum lymphatic drainage at the injury site.

It has even been hypothesized that icing an injury may ironically restrict lymphatic flowand promote fluid build-up (Starrett K: Mobilitywod video link 2012). When ice is applied to a soft tissue for a prolonged period, the lymphatic vessels in the region increase their permeability resulting in large amounts of fluid exiting the lymphatics into the injured area, thereby increasing the amount of local swelling (Meeusen & Lievens 1986).

Thank you for signing up.
You have been added to our newsletter list.
Submit
Request an Appointment
Close x

Your message was successfully sent. Thank you for your time.
Submit
Request an Appointment
Close x

Your message was successfully sent. Thank you for your time.
COVID-19 updates.
Click here
X